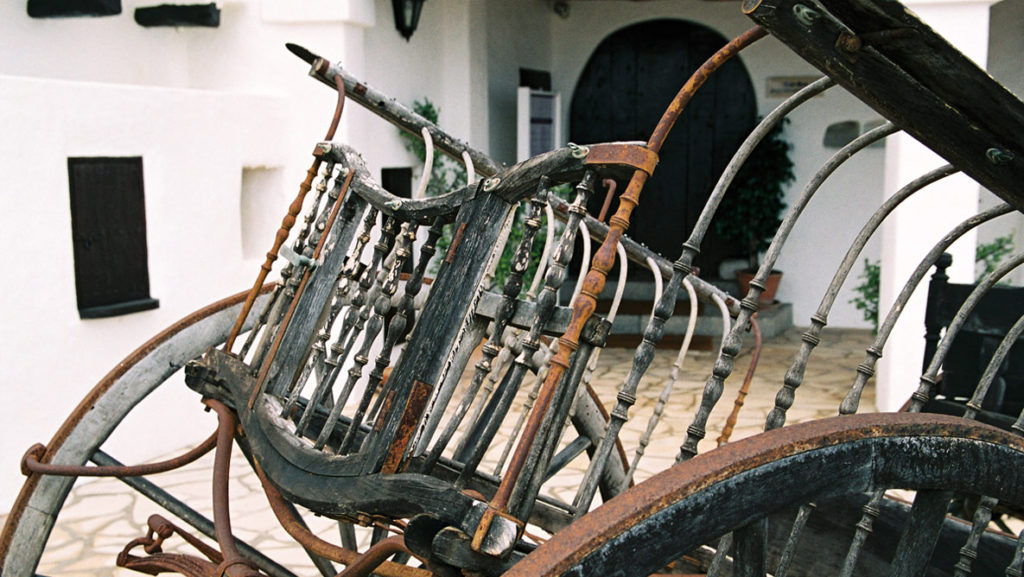 We have a remarkable journey to take you on. Will you come along?

Historically speaking, it has been a long road to the Santa Eulària des Riu of our day. From the first prehistoric settlers to the melting pot of nationalities that today comprises our municipality, a river of peoples has flowed to these shores, adapting to what the terrain offered them and to what arrived – sometimes for the worse – on the currents of the sea. Come discover our history. Follow the footsteps that preceded you on the road to here.

Every segment of the timeline – from the Bronze Age settlements to the still recent arrival of tourism – has informed our municipality. This living history can been seen and felt in our agrarian landscapes, with their crop terraces, oil presses, mills, irrigation channels and, of course, their watchtowers. Our history also lives on in our farmhouses and churches, which were designed to serve as small fortresses. The fact that so many cultures have passed through our lands was no accident. The strategic placement of the island within the Mediterranean, actually closer to Algiers than to Barcelona, made it an ideal base for replenishing supplies. As such, it was a safe haven enjoyed by the Phoenicians, who established Ibiza as one of their outposts on their commercial routes, further profiting from the valuable salt they extracted at Las Salinas, the salt pans they adroitly exploited. The Romans, too, made use of our territory, a fact preserved for posterity in the aqueduct at s’Argamassa. Several centuries later, the three hundred years of Moorish rule left its imprint on Santa Eulària des Riu, as evidenced by the oil presses, irrigation channels, cisterns, water wheels and mills that still characterize our countryside. Ses Feixes, another agricultural jewel, preserves the legacy of hydraulic expertise handed down by the Almoravids. The name the Moors gave our territory, Xarc, which means ‘east’ in Arabic, lingers on as the district name the Catalans retained when they conquered the island for the Crown of Aragon in the 13th century.

Eventually, the place name Xarc morphed into Quarter of the King (Quartó del Rei) and, in time, became Santa Eulària des Riu, the name given to the first church raised next to the river, an edifice which was destroyed in one of the numerous pirate attacks habitually visited upon our coasts up until the 17th century. Puig de Missa (literally, Hill of Mass) was subsequently built on higher ground, and constituted a true fortress where rural dwellers could take refuge during Turkish raids. The church also served as a lookout point over the all-important flour mills, located next to the river and vital for bread baking (as visitors can learn at the Can Planetes River Interpretation Centre). The houses surrounding the church are the result of urban planning undertaken in the late 18th century by Bishop Eustaquio de Azara, who proposed the creation of villages to offset the characteristic dispersion of the rural population. That proposal, it may be argued, eventually gave rise to the town of Santa Eulària des Riu as we know it today; although, it would not be until the early 19th century when the main thoroughfares of Sant Jaume and s’Alamera Boulevard were laid down. Starting in the mid 20th century, the municipality began to interface with the outside world via young well-to-do travelers who arrived on our shores in search of creative inspiration and lifestyle overhauls. Artists, hippies, architects and designers came, as did disenchanted businessmen, burnt out from their hectic activity. These refugees of modern existence began to gravitate toward Sant Carles de Peralta, Santa Gertrudis de Fruitera and other nearby points, lending them the cosmopolitan and bohemian character that has since distinguished Santa Eulària des Riu, a thriving, vital municipality which continues its march through history, step by step.