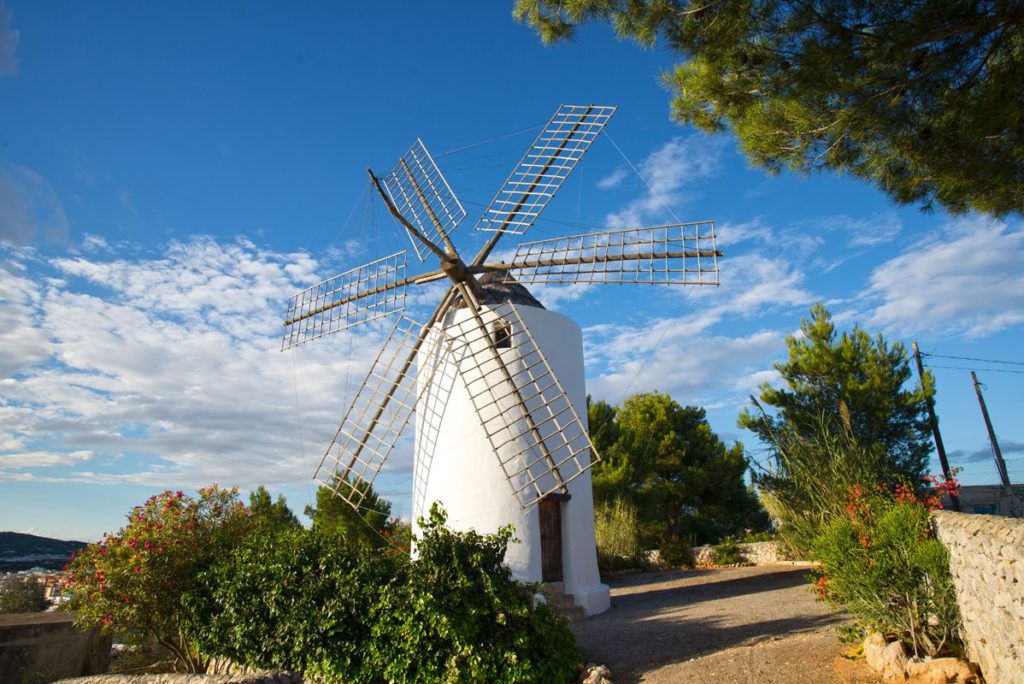 Just a few minutes’ drive from Jesús stands the only windmill in Ibiza to preserve its grinding mechanism fully intact: the mill at Es Puig d’en Valls. On this stop, we can further expand our understanding of rural Ibiza, building on what we have previously learned at Can Planetes and Can Ros.

The Pitiusan Islands (Ibiza and Formentera together) had up to 40 functioning flourmills, with the one at Puig d’en Valls being one of the last to be built. This visit allows us to see first-hand the mechanism that powered these windmills, where wheat, barley and maize were ground until almost the mid-20th century.

The mill has a cylindrical floorplan with thick walls that rise to a height of seven metres. It is divided into three storeys. The top of the tower is fitted with a wooden framework that rotates on a stone drum that guides the blades according to the direction of the wind. The blades, in turn, activate a wheel which, by means of another gear (lantern), transfers the movement of the blade axis to a vertical axis, which then triggers the flywheel and grinds the grain. Both the mill blades and the antennae, together with the machinery, were restored by the Island Government.

Near the top of the building, there are some small windows that allowed the miller to determine which way the wind was blowing and thus orient the blades to best advantage. When the wind was strong enough, the miller could grind up to 150 or even 200 kilos of cereal per hour, which is why it was so important to make the most of favourable meteorological conditions.

Curiosities
The mills on the Pitiusan Islands are different from those on Majorca and Minorca in that they are not attached to a house. The only two exceptions to this custom are the Can Pep Simó mill in San Antonio and the Salt Mill in Formentera.