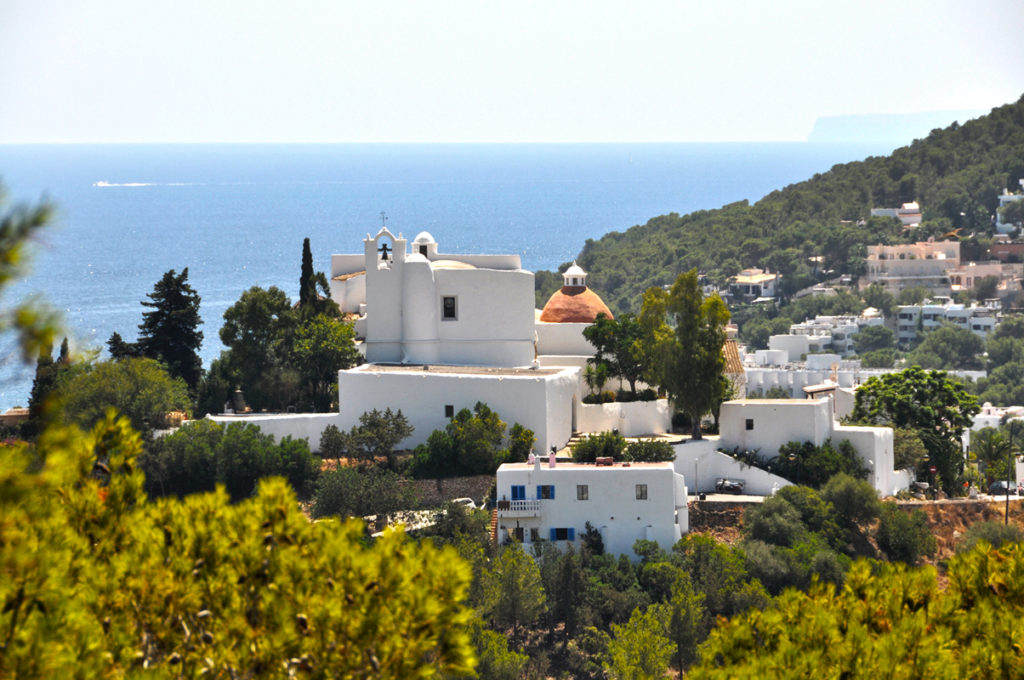 Located 15 kilometres from Ibiza town, Santa Eulària des Riu is the most important town in the northern half of the island and also the capital of the municipality bearing its name. Although it has a substantial year-round population, it is in summer that it becomes a bustling hub as locals and visitors alike saunter along s’Alamera Boulevard and other walkways; swim at the Santa Eulària urban beach – the first in the Balearics to be officially smoke-free –; sit at the sidewalk cafés and restaurants; and walk the two-km length of its lovely waterfront, whose terminus is the Santa Eulària Sports Marina.

Only River in Ibiza and the Balearics
Located along the island’s eastern seaboard, Santa Eulària owes much to the water, and not just to the Mediterranean, which supplies it with fish and seafood, but also to the only freshwater course in the Balearic Islands: the Santa Eulària River. Historically, its waters were used to irrigate the surrounding fields and orchards as well as to power the flour mills clustered at the foot of Puig de Missa, an industry of vital importance up until the 18th century. One enjoyable way to discover this discreet but strategic river is by taking the River Route, which traverses the waterfront, the Santa Eulària beach, the estuary, the Old Bridge (Pont Vell), the Can Planetes River Interpretation Centre, Puig de Missa church and the Ethnographic Museum of Ibiza.

What to See in Santa Eulària des Riu
The town’s crowning jewel is the architectural ensemble at the summit of Puig de Missa, the star component of which is the 16th century fortified church, one of the most outstanding in Ibiza and Formentera. A walk to the top rewards the effort so that its rustic elegance may be admired at close range, along with the baroque altarpiece in its interior, brought to the island from San Millán Church in Segovia. The streets surrounding the church are lined with charming houses and idyllic corners. Tucked among them is another worthwhile attraction: the Ethnological Museum of Ibiza. This restored farmhouse, known as Can Ros, is an excellent example of traditional Ibicenco architecture. Its permanent collection displays the accoutrements and folkways of local farmers prior to the advent of tourism.

Another interesting stop is the Barrau Gallery, which showcases the work of the Catalan painter Laureà Barrau i Buñol, a resident in Santa Eulària for two decades and a lover of Ibiza’s light, colors and customs. Outside the town centre other attractions include the Roca Llisa golf course; Cala Llonga beach, a resort 5 kilometres from Santa Eulàlia; and the tranquil shores of Es Niu Blau, Cala Pada and s’Argamassa. If you wish to explore the area on foot or by bike, take walking routes nº2, nº4 and nº6 and cycling routes nº4, nº6, nº7 and nº8. And, if you take the River Route, don’t forget to download our audio-guide beforehand.